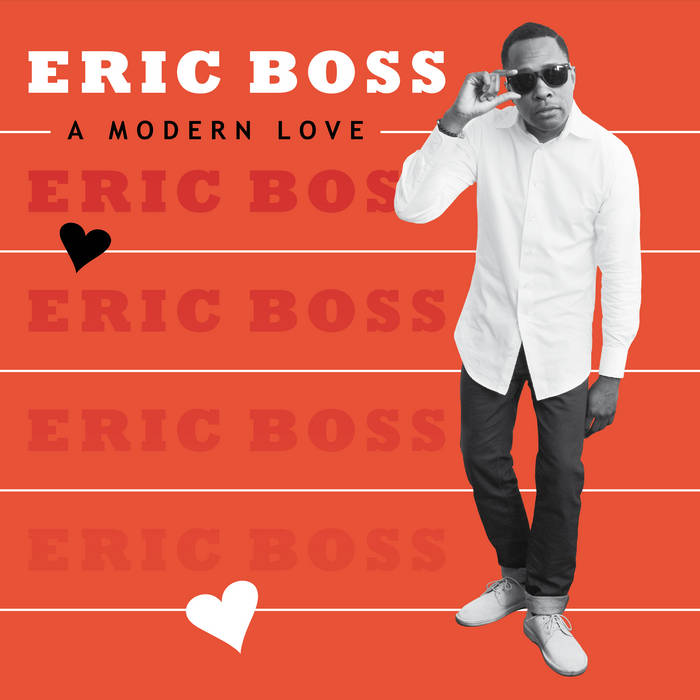 "A Modern Love" has all the ingredients of a future classic. High-profile guests? Check: with Gift Of Gab (Blackalicious) rapping on "I Wanna Ride", a track with more bounce than a lowrider chevy on Santa Monica boulevard, and soul siren Gizelle Smithfeaturing on "Spiders", a spooky number that will get you jumping out of your seat like you've been attacked by giant 8-legged arachnids. Need some dancefloor action? "Get Next To You" gets down to serious bizniz with crisp drums and a catchy hook guaranteed to get the party started. Something for lovers? We've got it covered with "Is It Love", where Eric waxes lyrical about his sweetheart over a honey-drenched soul beat.

From reggae-flavored vibes being served in inspirational number "Your Life Is Up to You" to the slow-burning grooves of "Merry Jane" which features singer Ishtar, the 10 tunes on "A Modern Love" all attest to Eric Boss' talent and versatility. Judging by how quickly the limited edition 45 of album opener "Closer To The Spirit" sold out when it was released, it seems safe to say Eric Boss is a king Midas with the golden touch when it comes to providing fresh grooves for contemporary ears, and "A Modern Love" is set to prove so once again.

Biography
Best known as one-half of soul duo Myron & E, Newark native Eric ‘E’ Cooke aka Eric Boss or E Da Boss is the definition of a multifaceted artist. It began with DJing and a love of hip-hop, which eventually turned into producing, and ultimately brought him to singing and songwriting both alongside Myron and on his own. Eric got his first taste of music by playing records during family card games and fish frys. As a teen, he began collecting records of his own and DJing, hanging out at the Music Factory and Rock and Soul in New York City. After relocating to southwest Virginia, he graduated high school and began DJing parties, which allowed him to invest in an Ensoniq ASR-10 keyboard, two Technics turntables and an eight-track recorder. He later moved to San Francisco where he met Myron Glasper while on the road with the Bay Area’s Blackalicious, and shortly after Eric released an independent record as a producer under the name E da Boss. While touring in Finland for his solo project, Eric connected with producer Didier Selin of The Soul Investigators, whose work with singer Nicole Willis helped define them as one of Europe’s foremost retro-soul bands. Back in the U.S., Eric recruited Myron as a singing and songwriting partner, and with the production of Didier behind them Myron & E was born. Together they released a string of successful 45 singles on The Investigators‘ label Timmion Records, went on to release their debut album “Broadway” on renowned label Stones Throw in 2013, collaborated on a 45 with Russian funk band The Soul Surfers on Ubiquity Records, and toured the world. In the meantime Eric continued to spread the jam of his talent far and wide; he contributed vocals to a track for UK sensation The Gene Dudley Group‘s sophomore album on Wah Wah 45s, released material under the bandname Lucid Paradise alongside Ishtar , founded and is one half of electro-boogie duo The Pendletons, duetted with Gizelle Smith on two tracks from her solo album “Ruthless Day” on Jalapeno and, more recently, began a prolific collaboration with Bjoern Wagner of The Mighty Mocambos. It is indeed with German heavyweight funk label Mocambo Records that Eric gave us the first taste of his solo effort, in the form of limited edition 45 single “The Turning Point feat. Ishtar“, a dramatic slice of deep soul that came out in 2016. It was however with his second Mocambo 45 “Closer To The Spirit” from 2017 that E definitively dropped his one-letter moniker to became Eric Boss. It is fitting then that the sold-out single would become the first track oh his much-anticipated debut solo album, “A Modern Love”, scheduled to drop in April, and sure to confirm this artist is a force to be reckoned with!

Bandcamp Daily  your guide to the world of Bandcamp

outré black metal, with a Victory Over the Sun interview and music from Liturgy and Jute Gyte.